When Alan and Georgina Judd moved into their new build at semi-rural Hamurana, across the lake from Rotoiti, they brought a menagerie with them: two dogs (Tui and Bess), a handful of sheep, some goats, a cow and an alpaca. The chickens are still to come.

Notwithstanding that small ark’s worth of dependents, the Judds’ decision to build a new home was all about downsizing and downshifting. Since moving to New Zealand in 2011, the expat English couple had operated a busy B&B just down the road in Hamurana, while also maintaining a 10-acre lifestyle block and caring for the abovementioned animals. They needed a break, and, after spending seven years in a house that was originally single-glazed and particularly cold, they wanted a home that was warm and light.

Their brief to the architect was straightforward: a simple one-level home, spacious, easy to maintain and well insulated, with views to the lake on the south side and plenty of glazing on the north to capture all-day sun. Visually, they were keen to maximise the contrast between light brick cladding and dark weatherboards.

They got that, and more. Polished concrete floors soak up the sunshine that floods into the house, and the ambient warmth is added to by underfloor heating fueled by a Marshall wood boiler and a powerful wood fire in the generously sized living area.

To make the most of all this, they selected windows and doors from Vantage’s ‘Klima Series’, which is renowned for thermal efficiency. Made of highly durable uPVC, Klima also withstands harsh sunlight without degrading or discolouring, and delivers excellent sound insulation and impressive ventilation. The Judds found the white joinery enhances the contrast with the dark weatherboards, and a Cola Red Plasma aluminium entrance door for the statement.

Initially, they’d anticipated installing bi-fold doors, but decided instead to use sliders to maximise indoor-outdoor flow. For windows, they chose Low-E glass in a grey tint to protect furnishings. They also like the fact that, with the tint, you can’t really see the interior when you’re outside, says Georgina. “We sometimes see the cows looking at their own reflections in the door!”

Since moving in at the start of the year, they’ve gravitated to the living area – the warmest room in the house – where Alan tends to read and Georgina has set up her spinning wheel. “But whenever the sun’s out we’ll be on the deck – it gets lovely sun all day and is sheltered from the wind.”

There’s still landscaping to do, electric gates to install, chickens to bring home to roost. But they’re feeling at home.

“It’s light, it’s warm, it’s got a good living space, and it’s very peaceful, looking out over the trees to the lake,” says Alan. “For our first attempt at building from scratch, it’s been very successful.”

As seen in Your Home & Garden magazine

The final product is light, warm and very peaceful 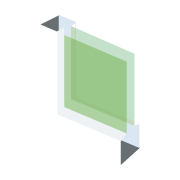